Naoyun is a software that create a bridge between Twitter and Gephi with their own Stream API. You can « follow » hashtags, words or users on twitter and display them as a network in Gephi in real time.

Here is a scheme to understand the architecture :

For the moment, Naoyun have 3 network logic :

TwitterGephiStreamer extends a specific class : GephiStreamer. This Class can send message to Gephi with the Gephi Streaming API. I based the implementation thanks to theses 2 useful links :

The new version comes with a GUI. It should make life easier 😀

Keep in mind that Naoyun still in development, so sometime it might not work properly and some features are missing.

Because it’s serious twitter business, you have to get a token. For the first launch, the application will pleased you to use a link in order to obtain a PIN Code. This PIN code has to be enter after in the software promp. Don’t worry, if the process is right, this won’t be ask for you anymore. The Token will be stored in the TwitterProperties.properties file.

You should see this windows 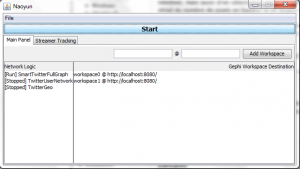 Here, by right clicking, you can activate defined Network Logic and link them to a Gephi Streamer. 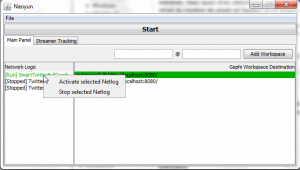 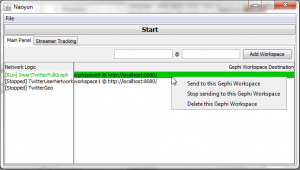 If you select a Network logic, it will show you in green the gephi platform where the graph will be try to be send.

By default, you have only 2 workspaces defined, but it’s possible to add others. Just fill up de form and click to Add Workspace .

It’s not possible yet to define other Network logic.

The other tabs show you the streamer stracking part. 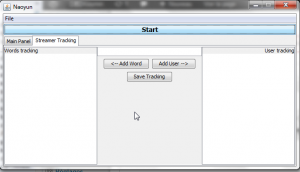 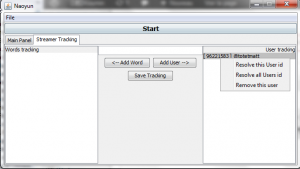 /!\ User need to have their id to be followed : Method used here might not works, the better is that you provide the list of user with their id in tracking/user.csv /!\ 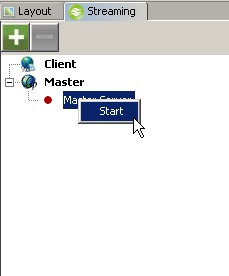 By default the server is http://localhost:8080

If you have multiple gephi stream, add as many workspace as you need and don’t forget to start the Streaming Server on each workspace.

If it’s all right, and if there is activity on your research, you should see some edges and nodes party in Gephi. You can now use some Layout (like ForceAtlas 1 & 2) to have a better visualization. 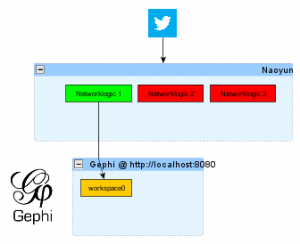 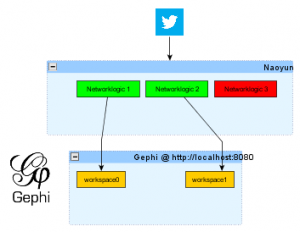 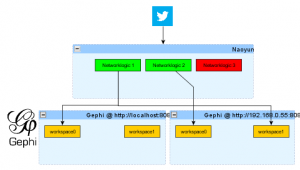 Last one is possible to put in place, but I didn’t test it [may explode].

I start to stream, but nothing append on Gephi ?

To follow user, if the GUI method isn’t working well, you can edit the tracking/user.csv file. Each line represent a user.

You’r behind a proxy ?

Just open the .bat or .sh script and change this :

Re-download or clean the properties file by deleting everything inside.

If still doesn’t work, try to resynchronize your system time or better enabled automatic time synchronisation (thx to @evrsml who troubleshoot that )